Soulfly’s Mike Leon and Possessed’s Daniel Gonzalez will join the Cavalera brothers on stage for the Return Beneath Arise US tour.

“The Beneath The Remains/Arise Tour is coming! Featuring on bass guitar Mike Leon (Soulfly) and lead guitar leading death/thrash expert Daniel Gonzalez (Possessed/Gruesome). We are going to bring these songs into the metal world in the most brutal way! Under a pale gray sky, we will rise. -Max Cavalera

“We can only count on the sickest players to come on stage with me and Max to play Beneath/Arise. So getting Dan Gonzalez from Possessed/Gruesome and Mike Leon from Soulfly was an amazing choice!…I can’t wait to hit the road!” -Iggor Cavalera

“I’m super excited to be a part of the revival of these classic albums with the brothers who created them, it’s a huge honor! These gigs are going CRUSH, and I’m sure we’ll deliver these songs better than they expected. have never been played before to everyone who joins us! See you on the road!” – Mike Leon

“It would be an understatement to say that I’m incredibly thrilled and honored to be able to play with Max and Iggor, and the fact that we’ll be playing material from Beneath The Remains and Arise is beyond surreal to me since I grew up loving it. these albums. Max and Iggor helped change the standards of Extreme Metal and these albums are still living proof of that. It’s crazy for me as a fan and as a musician to be able to play these songs live, and I can’t wait to do them justice!!!” –Daniel Gonzalez

Celebrate with the original founding members of influential heavy metal legends Sepultura. Max & Iggor Cavalera will perform a hybrid setlist composed exclusively of tracks from these two iconic albums Beneath the Remains and Arise. This tour takes place across the United States in May and June.

Since forming Sepultura over 30 years ago, the Cavalera brothers have each enjoyed unprecedented success in the music industry. Max’s most recent work with Soulfly, Go Ahead And Die, Cavalera Conspiracy (also with Iggor) and Killer Be Killed, in addition to projects by Iggor Mixhell, Petbrick and Soulwax, prove the enduring power of the Cavalera legacy.

It’s safe to say that the releases of Beneath The Remains (1989) and Arise (1991) completely changed the landscape of metal music across the world.

Max Cavalera says: “After Covid-19, we metalheads need to unleash our aggression with Beneath The Remains and Arise!”

Added Iggor Cavalera, “I can’t wait to perform our ‘Return Beneath Arise’ tour for our North American fans. See you in the pit!!!” 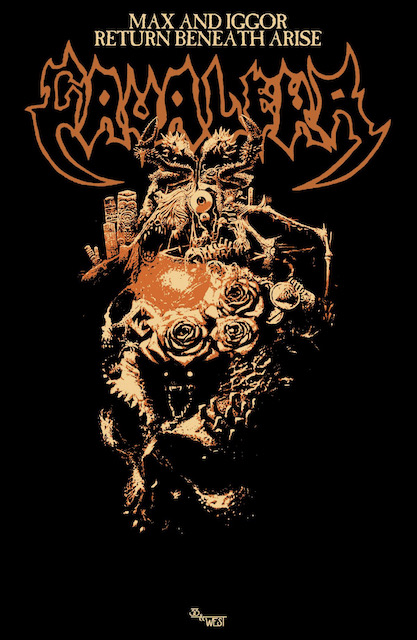